Robert C. Alberts was the author of numerous books including: The Shaping of the Point: Pittsburgh’s Renaissance Park; The Good Provider: H.J. Heinz and His 57 Varieties; and Benjamin West: A Biography. He is a former journalist and advertising executive. 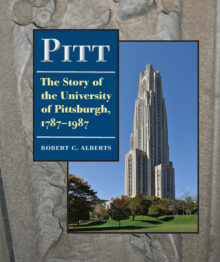 This is a history of a major American university from its birth on the western frontier in the eighteenth century through its two-hundredth anniversary. Told primarily through the stories of its energetic and sometimes eccentric chancellors, it’s a colorful and highly readable chronicle of the University of Pittsburgh.
The story begins in the early spring of 1781, when an ambitious young Philadelphia lawyer named Hugh Henry Brackenridge crossed the Alleghenies to seek his opportunity in Pittsburgh. “My object,”?he wrote, “was to advance the country [Western Pennsylvania] and thereby myself.” He founded Pittsburgh Academy, later to be the Western University of Pennsylvania and then the University of Pittsburgh, and lived to see the school grow along with the city.
Author Robert C. Alberts, mines the University archives and describes many issues for the first time. Among them is the role played by the Board of Trustees in the conflicts of the administration of Chancellor John Gabbert Bowman, including the firing of a controversial history professor, Ralph Turner; the resignation of the legendary football coach, Jock Sutherland; and a Board investigation into Bowman’s handling of faculty and staff. We see Pitt’s decade of progress under Edward Litchfield (1956&ndash;165), who gambled that the millions of dollars he spent . . . would be forthcoming form somewhere or someone; but who, as it turned out was mistaken.”
Pitt became a state-related university in August 1966, but financial stability was achieved gradually during the administration of Chancellor Wesley W. Posvar. The ensuing crisis of the 1960s and early 1970, caused by the Vietnam War, and the student protests that accompanied it, are described in rich detail. The history then follows Pitt’s emergence as a force in international higher education; the institution’s role in fostering a cooperative relationship with business; and its entry into the postindustrial age of high technology.
The story of Pitt reflects all the struggles and the hopes of the region. As Alberts writes in his preface, “There was drama; there was tragedy; there was indeed controversy and politics. There were, unexpectedly, rich veins of humor, occasionally of comedy.”