Robert G. Moser (Ph.D., University of Wisconsin, Madison) is assistant professor in the department of government at the University of Texas at Austin. He is co-editor of the forthcoming book, Russian Politics: Challenges of Democratization, and his numerous articles on political parties and elections in post-communist states have appeared in World Politics, Comparative Politics, Electoral Studies, and Post-Soviet Affairs. He is currently working on a comparative study of mixed electoral systems in eight countries. 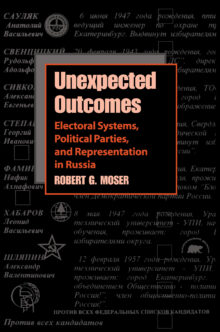 Can democratization be promoted by “getting the institutions right?” In Unexpected Outcomes, Robert G. Moser offers a compelling analysis of the extent to which institutions can be engineered to promote desired political outcomes. The introduction of democracy in Eastern Europe and the former USSR has enabled scholars to bring new perspectives to the debate about electoral systems. Russia is arguably the most important of the postcommunist states and its mixed electoral system provides an interesting controlled experiment for testing the impact of different electoral systems.

Moser examines the effects of electoral systems on political parties and representation in Russia during the 1990s. Moser’s study is not only a highly original contribution to our understanding of contemporary Russian politics, but also a significant step forward in the comparative study of electoral systems. Through his comprehensive empirical analysis of Russian elections, Moser provides the most detailed examination of a mixed electoral system to date. This system was introduced in Russia to encourage party formation and benefit reformist parties allied with President Yeltsin. However, the effects were contrary to what the creators of the system expected and also defied the most well-established hypotheses in electoral studies. Parties proliferated under both the PR and plurality halves of the election and patterns of women and minority representation ran counter to prevailing theory and international experience.

With an epilogue that updates the study through the December 1999 elections, Unexpected Outcomes makes an important and timely contribution to the ongoing debate over the ability and inability of elites to fashion preferred political outcomes through institutional design.