Robert H. Cox is professor in the School of International and Area Studies and coordinator for European Studies at the University of Oklahoma. 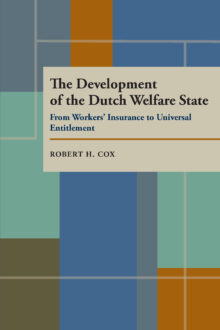 The Development of the Dutch Welfare State

From Workers' Insurance to Universal Entitlement

The development of the Dutch welfare state in the Netherlands started later than in other Western European countries, but once it started, it grew at a spectacular rate. The development was so rapid that it catapulted the Dutch from being welfare laggards to being welfare leaders. Cox charts the course of this growth, from the nineteenth century to the present, placing the Dutch case within the larger theoretical discussion of welfare states.In so doing, Cox challenges the widely held assumption that welfare programs always represent the policies of the social democratic left. He demonstrates that it was not the left but the more centrist religious parties that built the Dutch welfare state in the 1960s. Even more curious is the fact that these same political forces had resisted the expansion of welfare programs throughout the first half of the twentieth century.In many ways, the Netherlands is a crucial test case for assumptions about the welfare state. Its system is one of the largest in the world, rivaling Sweden's as one that devotes the greatest share of public spending to social welfare. How does it compare to other countries? Do present theories of welfare state development fit the Dutch case? What can we learn from the experience of a small state?Cox makes a signal contribution in clarifying the historical record concerning a little-studied country and in advancing theoretical debate.