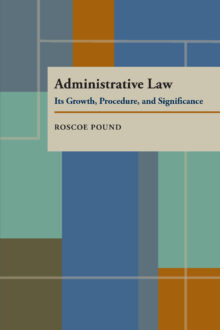 Its Growth, Procedure, and Significance

Roscoe Pound (1870-1964) taught at Harvard from 1910 until 1947, serving as dean of the Harvard Law School from 1916 to 1936. He is acknowledged as the founder of sociological jurisprudence&mdash;an interdisciplinary approach to legal concepts in which the law is recognized as a dynamic system that is influenced by social conditions and that, in turn, influences society as a whole. Pound's five-volume Jurisprudence is among the most comprehensive of twentieth-century legal works. His lectures draw direct connections between the abstract fundamentals of philosophy, using the works of Kant, Hegel, Spencer, Comte, and others, and the trends and problems of legal principles and rules. This book includes topics of: “The Place of Administration in the Legal Order”; “The Rise of Administrative Justice”; “Administrative Procedure”; “The Future of Judicial Justice”; and “Substitutes for Law”