Roy Godson is professor of government at Georgetown University and directs the National Strategy Information Center in Washington, DC. He has published extensively on issues of trans-state relations, security studies, and strategic approaches to countering transnational organized crime. He has served as a consultant to the United Nations and the US and other governments, and is currently developing societal/cultural approaches to complement law enforcement and regulatory approaches to preventing crime and corruption. He holds a Ph.D. from Columbia University. 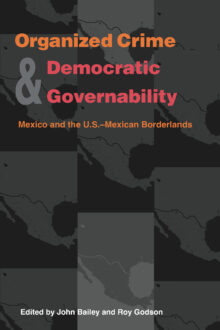 Mexico and the U.S.-Mexican Borderlands

The United States&ndash;Mexico border zone is one of the busiest and most dangerous in the world. NAFTA and rapid industrialization on the Mexican side have brought trade, travel, migration, and consequently, organized crime and corruption to the region on an unprecedented scale. Until recently, crime at the border was viewed as a local law enforcement problem with drug trafficking&mdash;a matter of “beefing” up police and “hardening” the border. At the turn of the century, that limited perception has changed.

The range of criminal activity at the border now extends beyond drugs to include smuggling of arms, people, vehicles, financial instruments, environmentally dangerous substances, endangered species, and archeological objects. Such widespread trafficking involves complex, high-level criminal-political alliances that local lawenforcement alone can’t address. Researchers of the region, as well as officials from both capitals, now see the border as a set of systemic problems that threaten the economic, political, and social health of their countries as a whole.
Organized Crime and Democratic Governability brings together scholars and specialists, including current and former government officials, from both sides of the border to trace the history and define the reality of this situation. Their diverse perspectives place the issue of organized crime in historical, political, economic, and cultural contexts unattainable by single-author studies. Contributors examine broad issues related to the political systems of both countries, as well as the specific actors&mdash;crime gangs, government officials, prosecutors, police, and the military&mdash;involved in the ongoing drama of the border. Editors Bailey and Godson provide an interpretive frame, a “continuum of governability,” that will guide researchers and policymakers toward defining goals and solutions to the complex problem that, along with a border, the United States and Mexico now share.