Sara Schoonmaker is associate professor of sociology at the University of Redlands. 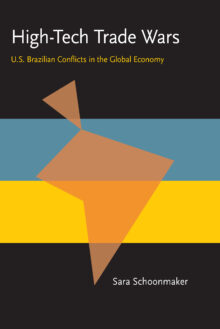 U.S.–Brazillian Conflicts in the Global Economy

Focusing on the conflicts between the United States and Brazilian governments over Brazil’s efforts to develop a local computer industry, High-Tech Trade Wars examines the political struggle between governments and multinational corporations in today’s global economy.

Sara Schoonmaker uses the technology industry to delve into one of the key political conflicts of our time: the construction of a free trade regime determined to open markets around the world to global capital, and attempts by Latin American, African, and other governments to resist this process. The Brazilian computer case is a prime example of a nationalist effort to promote local growth of a key high-technology industry&mdash;an effort that was eventually dismantled under the pressures of what Schoonmaker views as part of a broader process of neoliberal globalization.

High-Tech Trade Wars presents a multidimensional view of the globalization process, where economic changes are shaped by political struggle and cultural discourse. It includes interviews with Brazilian industrialists and state officials involved with implementing and, eventually, dismantling Brazil’s informatics policy, and discussions of grassroots-level protests organized against neoliberal globalization during the recent WTO meetings in Seattle and Davos, Switzerland.