Sarah C. Alexander is an associate professor of English at the University of Vermont. 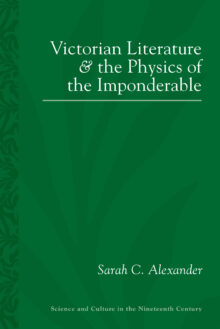 Victorian Literature and the Physics of the Imponderable

The Victorians are known for their commitment to materialism, evidenced by the dominance of empiricism in the sciences and realism in fiction. Yet there were other strains of thinking during the period in the physical sciences, social sciences, and literature that privileged the spaces between the material and immaterial. This book examines how the emerging language of the “imponderable” helped Victorian writers and physicists make sense of new experiences of modernity. As Sarah Alexander argues, while Victorian physicists were theorizing ether, energy and entropy, and non-Euclidean space and atom theories, writers such as Charles Dickens, William Morris, and Joseph Conrad used concepts of the imponderable to explore key issues of capitalism, imperialism, and social unrest.