Sarah Hamilton is a sociocultural anthropologist specializing in the study of economic development in Latin America and the Caribbean. She is director of the Women in International Development Program at Virginia Tech. 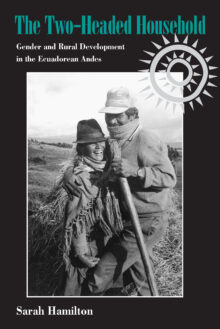 Gender and Rural Development in the Ecuadorean Andes

The Two-Headed Household is an ethnographic account of gender relations and intrahousehold decisionmaking as well as a policy-oriented study of gender and development in the indigenous Andean community of Chanchalo, Ecuador. HamiltonÆs main argument is that the households in these farming communities are “two-headed.” Men and women participate equally in agricultural production and management, in household decisionmaking, and share in the reproductive tasks of child care, food preparation, and other chores. Based on qualitative fieldwork and regional household survey data, this book investigates the effect on women's lives of gender bias in agricultural development programs and labor and commodities markets. Despite household economic reliance on these programs and markets, there is extraordinary evidence of social and economic gender equality. Traditional Andean kinship structures enable women and men to enter marriage as materially equal partners. As seen in case studies of five women and their families, the author continually encounters joint decisionmaking and shared household and agricultural responsibilities. In fact, it often seems that women have the final say in many decisions. There is the belief that a dynamic balance of power between male and female heads provides an impetus toward mutually desired economic and social goals. Despite the strong influence of the patriarchal power of the hacienda system, Andean gender ideology accords women and men equal measures of physical, mental, and emotional fortitude. The belief that maintaining traditional forms of economic collaboration helped them survive on the hacienda was reinforced under the economic and political domination of the patriarchal systems of the landed elite, church, and state. Today, these people are proud of their strong women, strong families, and community solidarity which they believe distinguishes them from Ecuadorean and American societies. Hamilton suggests that women in developing countries should not be viewed as simply, or even inevitably, victims of gender-biased structural or cultural institutions. They may resist male bias, perhaps even with the support of local-level institutions. The Two-Headed Household demonstrates that analysis of gender relations should focus on forms of cooperation among women and men, as well as on forms of conflict, and will be of interest to scholars and students in anthropology, gender and development, and Latin American Studies.