Sonya Jason grew up in Jefferson, Pennsylvania, a tiny coal patch of company-owned houses in Washington County. One of nine children born to Carpatho-Rusyn immigrants, she now lives in southern California. 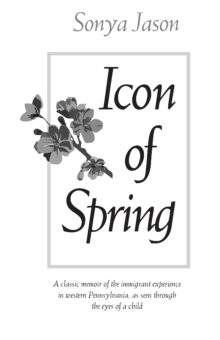 A realistic but fond memoir of a girlhood lived in a coal camp, or “patch” in southwestern Pennsylvania during the Great Depression of the 1930s, Icon of Spring is also a coming-of-age story. It begins in 1932 when the narrator, the child of Carpatho-Rusyn immigrant parents, is seven years old. Her father is a miner, and work is scarce as the grip of the depression tightens. The jars of canned food on the storeroom shelf are dwindling, and the family fears eviction from their small company-owned house.Icon of Spring recounts her childhood during the next seven years, as she grows to adolescence in a world that is protective within her family but shares the violence of the coal region. She is witness to accidental death in the mines, the murder of a coal and iron policeman, the muted struggle to unionize, and the itinerant beggars who appear at the back door.Yet this is far from a grim book, for we see life in the patch through the eyes of the child. Warmed by the closeness she feels toward her parents, especially her mother, and her nine brothers and sisters, she knows the joy of one sisterÆs wedding and raucous reception, the mysterious Easter ritual of the Eastern Orthodox Liturgy, the fun of attending a medicine show, and the almost incandescent hope placed in the new president, Franklin D. Roosevelt. Her life is peopled by traveling peddlers, the priest of her church, a union organizer, and the town bachelors: Big John, Peg Leg Pete, and Shorty Steve.Icon of Spring evokes life in a depression coal patch from a female perspective. A splendid memoir of childhood told with accuracy and warmth which is also rich in social history, it will appeal to general readers as well as students.