Stephen K. Wegren is associate professor of political science at Southern Methodist University. Since 1990 he has published more than three dozen articles on various aspects of political and economic reforms in Russia. His most recent publication is Land Reform in the Former Soviet Union and Eastern Europe. 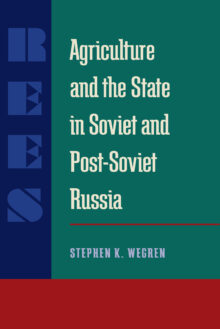 Agriculture and the State in Soviet and Post-Soviet Russia

A comprehensive, original, and innovative analysis of the social, economic, and political factors affecting contemporary Russian reform, the book is organized around the central question of the role of the state and its effect on the course of Russian agrarian reform. In the wake of the collapse of the USSR, contemporary conventional wisdom holds the the Russian state is “weak.” Stephen Wegren feels that the traditional approach to the weak/strong state suffers from measurement and circular logic problems, believing that the Russian state, thought weaker than in its Soviet past, is still relatively stronger than other actors. The state’s strength allows it to intervene in the rural sector in ways that other power contender cannot.

Specifically, as a measure of state intervention, Wegren analyzes how the state has influenced urban-rural relations, rural-rural relations, and the nonstate (private) agricultural sector. Several dilemmas arose that have complicated successful agrarian reform as a result of the nature of state interventions, how reform policies were defined, and the incentives rhar arose from state-sponsored policies. During contemporary Russian agrarian reform, urban-rural differences have widened, marked by a deterioration in rural standards of living and increased alienation of rural political groups from urban alliances. At the same time, within the rural sector, reform failed to reverse rural egalitarianism. In addition, the nature of state interventions has undermined attempts to create a vibrant, productive private rural sector based on private farming.

Wegren’s research is based upon extensive field work, interviews, archival documents, and published and unpublished source material conducted over a six-year period, and he demonstrates the link between agrarian reform and the success of overall reform in Russia. This learned and often controversial volume will interest political scientists, policy makers, and scholars and students of contemporary Russia.