Steven E. Schier, the Dorothy H. and Edward C. Congdon Professor of Political Science at Carleton College, is the author or editor of numerous books including The Postmodern Presidency: Bill Clinton’s Legacy in U.S. Politics, and By Invitation Only: The Rise of Exclusive Politics in the United States. 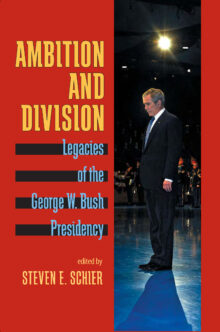 The presidency of George W. Bush is notable for the grand scale of its ambitions, the controversy that these ambitions generated, and the risks he regularly courted in the spheres of politics, economics, and foreign policy. Bush's ultimate goal was indeed ambitious: the completion of the conservative “regime change” first heralded by the election of Ronald Reagan in 1980. But ironically this effort sewed the very discord that ultimately took root and emerged to frustrate Bush's plans, and may even have begun to unravel aspects of the Reagan revolution he sought to institutionalize.

Politically, the Bush White House sought the entrenchment of consistent Republican electoral majorities. Institutionally, the Bush administration sought to preserve control of Congress by maintaining reliable partisan Republican majorities, and to influence the federal courts with a steady stream of conservative judicial appointees. The administration also sought increased autonomy over the executive branch by the aggressive use of executive orders and bureaucratic reorganizations in response to 9/11.

Many of these efforts were at least partially successful. But ultimately the fate of the Bush presidency was tied to its greatest single gamble, the Iraq War. The flawed prosecution of that conflict, combined with other White House management failures and finally a slumping economy, left Bush and the Republican Party deeply unpopular and the victim of strong electoral reversals in 2006 and the election victory of Barack Obama in 2008. The American public had turned against the Bush agenda in great part because of the negative outcomes resulting from the administration's pursuit of that agenda.

This book assembles prominent presidential scholars to measure the trajectory of Bush's aspirations, his accomplishments, and his failures. By examining presidential leadership, popular politics and policymaking in this context, the contributors begin the work of understanding the unique historical legacy of the Bush presidency. 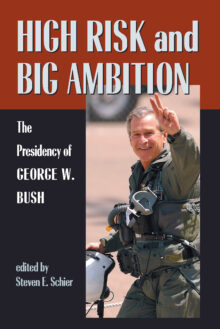 Elected with no clear public mandate, George W. Bush achieved surprising legislative successes in his early months in the White House. Following September 11, 2001, his public support rose to unprecedented heights. Actions taken in the following months and years have revealed the exceptionally ambitious nature of the Bush presidency.

High Risk and Big Ambition brings together leading presidency scholars and journalists to assess the trajectory and character of Bush’s time in office. The common theme running through their contributions is that this presidency is best characterized by a series of bold political and policy risks in the service of two primary goals: the transformation of American foreign policy and the creation of a lasting Republican dominance of domestic politics.

Included are discussions of foreign policy, national security, the war in Iraq, Bush’s leadership style, religious politics, and economic policy. George W. Bush emerges as an “orthodox innovator” who skillfully deploys both personal politics and the power of his office in an effort to complete the conservative governmental agenda initiated by Ronald Reagan. Yet because of the size of his ambitions, each success sets up a greater risk of failure. That alone makes his presidency one of the most interesting and consequential in decades. 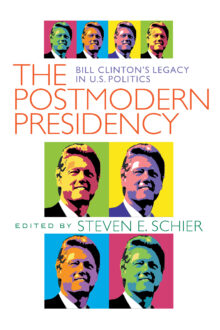 Choice Outstanding Academic Book. As America’s first truly postmodern president, Bill Clinton experienced both great highs and stunning lows in office that will shape the future course of American politics. Clinton will forever be remembered as the first elected president to be impeached, but will his tarnished legacy have lasting effects on America’s political system? Including the conflict in Kosovo, the World Trade Organization meeting in Seattle, and new developments in the 2000 presidential campaign, The Postmodern Presidency is the most comprehensive and current assessment of Bill Clinton’s presidency available in print. The Postmodern Presidency examines Clinton’s role in redefining the institution of the presidency, and his affect on future presidents’ economic and foreign policies. The contributors highlight the president’s unprecedented courtship of public opinion; how polls affected policy; how the president gained “celebrity” status; how Clinton’s “postmodern” style of public presidency helped him survive the 1994 elections and impeachment; and how all of this might impact future presidents. This new text also demonstrates how the Clinton presidency changed party politics in the public and in Congress, with long-term implications and costs to both Republicans and his own Democratic party, while analyzing Clinton’s effect on the 1990s “culture wars,” the politics and importance of gender, and the politics and policy of race. This text is a must for anyone who studies, teaches, or has an interest in the American presidency and politics. 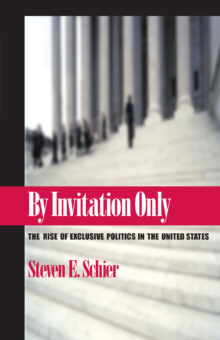 The Rise of Exclusive Politics in the United States

By Invitation Only examines the shift in the United States from mobilization (the partisan method of stimulating very high voter turnout in elections) to activation—the political variant of “niche marketing.” This more contemporary method that parties, interest groups, and candidates employ induces particular, finely targeted portions of the public to become active in elections, demonstrations, and lobbying. Traditional partisan mobilization was a crude tool, operating through personal and print communication. It involved broad appeals often carried through personal conversation with local party workers, or through America’s then highly partisan press. Political mobilization predominated during election campaigns of the late 19th and early 20th centuries, a period of peak party power. The shift from mobilization to activation allows organizers to mobilize strategic minorities while cloaking the effort in a misleading guise of popular rule. The vogue of participation is that all should get involved. In fact, as Schier illustrates, the process encourages only a strategically selected few to vote in elections or petition government for their interests. The result is a decline of majority rule in American politics. A must-read for anyone concerned with politics in America.