Stuart C. Woodruff was professor of literature at the University of Vermont. 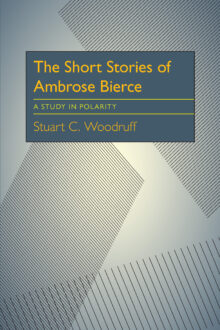 The Short Stories of Ambrose Bierce

One of the most interesting figures to emerge at the turn of the twentieth century was Ambrose Bierce, whose acerbic columns in the San Francisco Examiner spread his fame as AmericaÆs most bitter cynic and misanthrope, and whose disappearance into Mexico surrounded his name with an aura of mystery. Although best known during his lifetime for his journalism and always critical of his own writing&mdash;”the magnificent intention mocked by the actual achievement”&mdash;BierceÆs fiction endures, especially his short stories about the Civil War. Originally published in the 1890s and rediscovered in the 1920s, the Civil War stories are filled with unsparing descriptions of death and suffering, disillusionment and fatalism. They also show a concern for form and craftsmanship, a controlled irony, and an economy of detail that are distinctly modern. In this pioneering study of BierceÆs stories, Stuart Woodruff examines the best and worst of BierceÆs fiction with clarity and excellent critical sense, and he traces the causes of BierceÆs success and failure as a writer, analyzing his inability to reconcile the extremes of temperament and belief that marked his life and give his stories their characteristic form. Among the pieces discussed: “An Occurrence at Owl Creek Bridge,” “The Mocking-bird,” “One of the Missing,” “Chickamauga,” “Hau00efta the Shepherd,” “What I Saw at Shiloh,” and excerpts from The DevilÆs Dictionary and Tales of Soldiers and Civilians.