Sudhir Chella Rajan is professor at the Indian Institute of Technology, Madras. 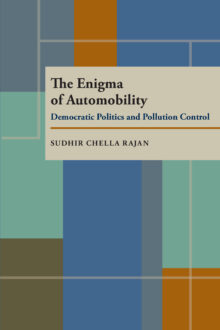 The Enigma of Automobility

Rajan investigates air pollution policy as one based on how to make cars less polluting. Putting the onus on auto manufacturers and owners has generated an elaborate scheme of emissions testing and pollution-control devices, and does not look at the technology itself as the heart of the problem. Rajan focuses his study on data collected in Los Angeles, to show how emissions testing burdens the poor, who tend to own older cars that pollute more. Rajan argues for democratic control over technology, steering it away from special interest groups and toward a long-term ethical resolution.