Douglass Sullivan-Gonzalez is assistant professor of history at the University of Mississippi. He is the translator of Edelberto Torres-Rivas’s Interpretacion del desarrollo social centroamericano (History and Society in Central America). He has taught and traveled extensively in Central America. 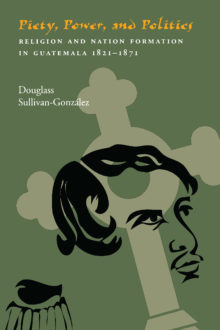 Douglass Sullivan Gonzalez examines the influence of religion on the development of nationalism in Guatemala during the period 1821-1871, focusing on the relationship between Rafael Carrera amd the Guatemalan Catholic Church. He illustrates the peculiar and fascinating blend of religious fervor, popular power, and caudillo politics that inspired a multiethnic and multiclass alliance to defend the Guatemalan nation in the mid-nineteenth century.Led by the military strongman Rafael Carrera, an unlikely coalition of mestizos, Indians, and creoles (whites born in the Americas) overcame a devastating civil war in the late 1840s and withstood two threats (1851 and 1863) from neighboring Honduras and El Salvador that aimed at reintegrating conservative Guatemala into a liberal federation of Central American nations.Sullivan-Gonzalez shows that religious discourse and ritual were crucial to the successful construction and defense of independent Guatemala. Sermons commemorating independence from Spain developed a covenantal theology that affirmed divine protection if the Guatemalan people embraced Catholicism. Sullivan-Gonzalez examines the extent to which this religious and nationalist discourse was popularly appropriated.Recently opened archives of the Guatemalan Catholic Church revealed that the largely mestizo population of the central and eastern highlands responded favorably to the churchÆs message. Records indicate that Carrera depended upon the clericsÆ ability to pacify the rebellious inhabitants during GuatemalaÆs civil war (1847-1851) and to rally them to GuatemalaÆs defense against foreign invaders. Though hostile to whites and mestizos, the majority indigenous population of the western highlands identified with Carrera as their liberator. Their admiration for and loyalty to Carrera allowed them a territory that far exceeded their own social space.Though populist and antidemocratic, the historic legacy of the Carrera years is the Guatemalan nation. Sullivan-Gonzalez details how theological discourse, popular claims emerging from mestizo and Indian communities, and the caudilloÆs ability to finesse his enemies enabled Carrera to bring together divergent and contradictory interests to bind many nations into one.