Thomas G. Rawski is professor of economics and history at the University of Pittsburgh. His books include Economic Growth in Prewar China and China’s Transition to Industrialism: Producer Goods and Economic Development in the Twentieth Century. 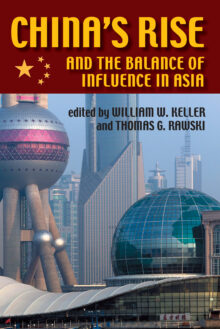 China’s Rise and the Balance of Influence in Asia

China's protracted boom and political transformation is a major episode in the history of global political economy. Beginning in the late 1970s, China experienced a quarter century of extraordinary growth that raised every indicator of material welfare, lifted several hundred million out of poverty, and rocketed China from near autarky to regional and even global prominence. These striking developments transformed China into a major U.S. trade and investment partner, a regional military power, and a major influence on national economies and cross-national interchange throughout the Pacific region. Beijing has emerged as a voice for East Asian economic interests and an arbiter in regional and even global diplomacy-from the Asian financial crisis to the North Korean nuclear talks. China's accession to the World Trade Organization promises to accentuate these trends.
The contributors to this volume provide a multifaceted examination of China in the areas of economics, trade, investment, politics, diplomacy, technology, and security, affording a greater understanding of what relevant policies the United States must develop. This book offers a counterweight to overwrought concerns about the emerging “Chinese threat” and makes the case for viewing China as a force for stability in the twenty-first century.