Varun Gauri is a Senior Economist in the Development Research Group of the World Bank. 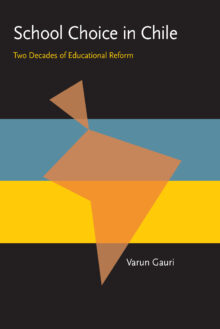 School Choice in Chile examines the dramatic educational decentralization and privatization of schools in Chile. In the early 1980s, the Pinochet regime decentralized schooling, providing vouchers for parental choice of public or private schools. At the same time, the government supposedly gave the administration of schools to local municipalities. Although the reform has merit and is defended by some as a major achievement, Varun Gauri shows the many ways in which it has not worked.

In this process of reform, neither the administration of schools nor school content was really decentralized from the Ministry of Education, nor did students gain equality of educationaly opportunity or better schooling outcomes. These failures of the post-welfare model are due partly to Chile’s political and economic problems of the era, but are also evidence of flaws at its core, at least where education is concerned.

The study presents data for an original survey of 726 households in Greater Santiago that finds more evidence for social and economic stratification among Chilean schools than past analyses have shown. Gauri finds that information about school quality, a sense of entitlement, and the use of specific search techniques increase the odds that a child attends a school with high achievement scores. Gauri offers some insights as he supports the criticism that market forces might exacerbate inequalities without necessarily generating clear gains in academic achievement. In the new system, many parents continued to be ill-informed about differences among schools, nonacademic factors played a major role in school selection, schools appeared to use entrance exams to practice a form of “creaming,” and parental wealth was a strong determinant of whether families were willing and able to take full advantage of choice programs.

These are extremely timely findings, especially in light of the current debate over school choice and vouchers in the United States. Because the United States has little experience in school choice, School Choice in Chile presents a convincing and necessary report on an almost twenty-year-old experience with information from which all nations can learn. Parents, policy analysts in education and social welfare, as well as those studying political science, public policy, and education, will find it extremely useful.