Victor Andrade was Bolivian ambassador to the United States at various times between 1944 to 1962. 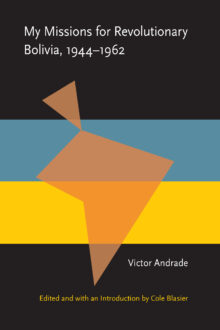 Victor Andrade, Bolivian ambassador to the United States at various times between 1944 and 1962, recounts a unique Latin American perspective on U.S. politics and foreign policy. He describes meetings with Roosevelt, Truman, Eisenhower, and with the many journalists, cabinet members, senators, and House members who were part of his daily work in the world of Washington politics.

Andrade first came to Washington as ambassador in 1944, representing a young revolutionary government determined to check the power of the Bolivian tin barons who had dominated the country for decades. After his government was overthrown, he spent six years in exile, and returned to Washington when the Movimiento Nacionalista Revolucionario resumed power in 1952. His deep understanding of Washington's massive political and bureaucratic establishment, combined with his renowned charm, resourcefulness, and perseverance, gave him the ability to negotiate massive economic and military aid for the development of the country. It also allows him to present a candid, knowledgeable inside view of U.S.-Bolivian relations through these years which will at times make U.S. readers proud and at times ashamed.