Victor J. Vitanza is professor of English and rhetoric at Clemson University, where he is director of the Ph.D. program in rhetorics, communications, and information design (RCID). He is the author of Negation, Subjectivity, and the History of Rhetoric. 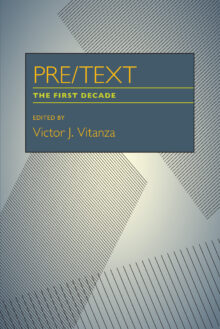 After the first issue of PRE/TEXT appeared in 1981, a colleague told Victor Vitanza, the creator, editor and publisher of the journal, how disgusted she was by it, how unreadable it was, how devoted to self-aggrandizement-and how much she enjoyed two articles in it. Devoted to exploring and expanding the field of rhetoric and composition by publishing articles considered “inappropriate” by other journals in the field, PRE/TEXT has, from its inception, made people angry. Yet it has survived, and thrived. This collection of essays pays tribute to the first ten years of the journal, and each reprinted article is paired with a short comment by the author. Also included is Victor Vitanza's retrospective history of the journal and prospectives for the future.