William W. Boyer is Charles P. Messick Professor Emeritus of public administration in the department of political science and international relations at the University of Delaware. 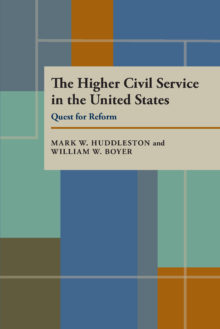 The Higher Civil Service in the United States

Every time control of the U.S. presidency is passed from one party to another, the entire top layer of the executive branch changes. Thousands of men and women take down their pictures, pack up their desks, and move back into private life, just as others dust off their pictures and move in. The U.S. stands alone in this respect. Nearly every other advanced democracy is managed-save for elected officials and a few top aides-by an elite cadre of top civil servants selected by highly competitive examinations.Hudleston and Boyer tell the story of U.S. efforts to develop higher civil service, beginning with the Eisenhower administration and culminating in the passage of the Civil Service Reform Act of 1978. Arguing that the highly-politicized U.S. system simply hasn't worked, they examine why and how reform efforts have failed and offer a series of recommendations for the future.