William W. Keller is Wesley W. Posvar Professor of International Security Studies and director of the Matthew B. Ridgway Center for International Security Studies at the University of Pittsburgh. He is the author of Arm in Arm: The Political Economy of the Global Arms Trade, The Liberals and J. Edgar Hoover: Rise and Fall of a Domestic Intelligence State, and coeditor of Hitting First: Preventive Force in U.S. Security Strategy. 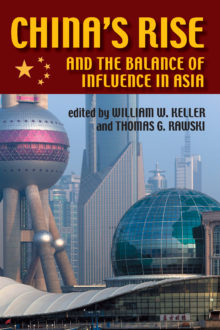 China’s Rise and the Balance of Influence in Asia

China's protracted boom and political transformation is a major episode in the history of global political economy. Beginning in the late 1970s, China experienced a quarter century of extraordinary growth that raised every indicator of material welfare, lifted several hundred million out of poverty, and rocketed China from near autarky to regional and even global prominence. These striking developments transformed China into a major U.S. trade and investment partner, a regional military power, and a major influence on national economies and cross-national interchange throughout the Pacific region. Beijing has emerged as a voice for East Asian economic interests and an arbiter in regional and even global diplomacy-from the Asian financial crisis to the North Korean nuclear talks. China's accession to the World Trade Organization promises to accentuate these trends.
The contributors to this volume provide a multifaceted examination of China in the areas of economics, trade, investment, politics, diplomacy, technology, and security, affording a greater understanding of what relevant policies the United States must develop. This book offers a counterweight to overwrought concerns about the emerging “Chinese threat” and makes the case for viewing China as a force for stability in the twenty-first century.

The U.S. war in Iraq was not only an intelligence failure&mdash;it was a failure in democratic discourse. Hitting First offers a critical analysis of the political dialogue leading up to the American embrace of preventive war as national policy and as the rationale for the invasion and occupation of Iraq. Taking as its point of departure the important distinction between preemptive and preventive war, the contributors examine how the rhetoric of policy makers conflated these two very different concepts until the public could no longer effectively distinguish between a war of necessity and a war of choice.
Although the book focuses on recent events, Hitting First takes into consideration the broader historical, ethical, and legal context of current American policies. Precedents are examined for preventive military action based on conventional as well as nuclear, biological, and chemical weapons threats. The authors also consider recent examples of the rhetoric of &ldquo;humanitarian intervention,&rdquo; which have tended to undermine traditional notions of national sovereignty, making purportedly &ldquo;morally justifiable&rdquo; actions easier to entertain. Intelligence gathering and its use, manipulation, and distortion to suit policy agendas are also analyzed, as are the realities of the application of military force, military requirements to sustain a policy of preventive war, and post-conflict reconstruction.
Hitting First presents a timely and essential view of the lessons learned from the failures of the Iraqi conflict, and offers a framework for avoiding future policy breakdowns through a process of deliberative public and governmental debate within a free market of ideas. The critiques and prescriptions offered here provide a unique and valuable perspective on the challenges of formulating and conduct of national security policy while sustaining the principles and institutions of American democracy. This collection will appeal to students and scholars of American foreign policy, international relations, political communication, and ethics.