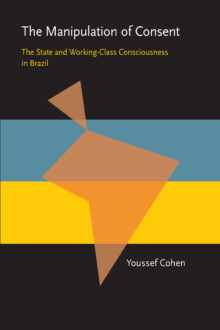 The Manipulation of Consent

The State and Working-Class Consciousness in Brazil

The Manipulation of Consent is a major contribution to our knowledge of the mechanisms by which elites instill in the lower classes the beliefs, values, and attitudes that legitimate their subordinate position in the social order. Youssef Cohen explores the case of Brazil, where the working class was relatively quiescent in the face of the authoritarian regime established by force in 1964. Drawing on recent advances in the theory of the state and the study of power relations, as well as on modern methods of social inquiry, he reveals the techniques of ideological control in the concrete setting of modern Brazilian society. The result is an unusually illuminating case study that blends theoretical exposition, conceptually informed historical analysis, and a wealth of emperical data. The Manipulation of Consent makes a substantial addition to the understanding of Brazilian politics, the study of power relations, and the theory of the state.