Emmett H. Buell Jr., professor of political science and director of the Richard G. Lugar Program in Politics and Public Service at Denison University, has published extensively on the presidential nominating process, and is coeditor of Nominating the President. 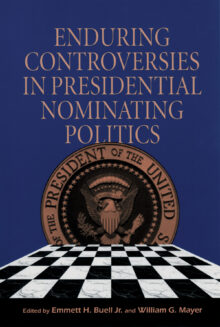 Enduring Controversies in Presidential Nominating Politics retraces the more than two hundred-year history of presidential elections in the United States to provide a primer on how the process has evolved from the days of the founders, through the heyday of nominating conventions, to today’s overwhelming interest in early primaries.
Original essays by the editors introduce, critique, and occasionally even refute a wide variety of historical readings including Alexander Hamilton’s defense of election procedures, excerpts of individual states’ nominations of candidates in 1824, an overview of the impact television has had on nominating conventions, and calls for a national rotating primary scheme in 2004. As a whole, the collection reveals the common threads that run through the history of the nominating process, and points out that today’s litany of complaints is not at all new.