Adrian Kirwan is a historian of science and technology, secretary of the History of Science, Technology, and Medicine Network Ireland, and social media and webmaster officer of the Irish Committee of Historical Sciences. 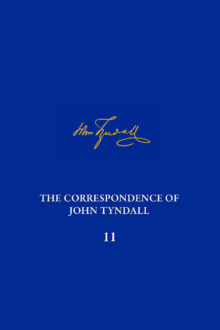 The Correspondence of John Tyndall, Volume 11

The eleventh volume of The Correspondence of John Tyndall covers the period from January 1869 to the end of February 1871 and contains 427 letters with more than 130 individual correspondents, as well as letters to several newspapers. These years find Tyndall an internationally established scientist with broad influence and feeling increasingly confident in that role. They were highly productive research years, and Tyndall had a wide scope of interests, publishing in scientific journals, popular magazines, and newspapers on a variety of topics, including diamagnetism, germ theory, comets, and atmospheric phenomena. The results of this research were presented in numerous papers and lectures in various venues and complemented by his regular public lecture series and annual Christmas lectures at the Royal Institution.