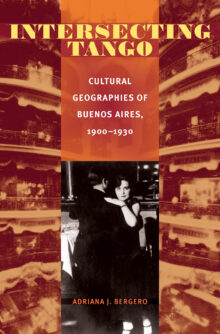 In the early part of the twentieth century, Buenos Aires erupted from its colonial past as a city in its own right, expressing a unique and vibrant cultural identity.

Intersecting Tango engages the city at this key moment, exploring the sweeping changes of 1900-1930 to capture this culture in motion through which Buenos Aires transformed itself into a modern, cosmopolitan city.

Taking the reader through a dazzling array of sites, sources, and events, Bergero conveys the city in all its complexity. Drawing on architecture and gendered spaces, photography, newspaper columns, schoolbooks, “high” and “low” literature, private letters, advertising, fashion, and popular music, she illuminates a range of urban social geographies inhabited by the city's defining classes and groups. In mining this vast material, Bergero traces the profound change in social fabric by which these diverse identities evolved, through the processes of modernization and its many dislocations, into a new national identity capable of embodying modernity.

In her interdisciplinary study of urban development and cultural encounters with modernity, Bergero leads the reader through the city's emergence, collecting her investigations around the many economic, social, and gender issues remarkably conveyed by the tango, the defining icon of Buenos Aires. Multifaceted and original, Intersecting Tango is as rich and captivating as the dance itself.