Adriana Michele Campos Johnson is associate professor of comparative literature at the University of California, Irvine. 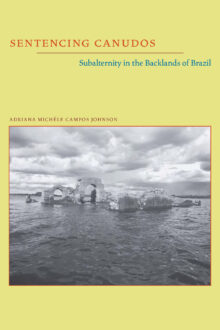 Subalternity in the Backlands of Brazil

In the late nineteenth century, the Brazilian army staged several campaigns against the settlement of Canudos in northeastern Brazil. The colonyÆs residents, primarily disenfranchised former slaves, mestizos, landless farmers, and uprooted Indians, followed a man known as Antonio Conselheiro (“The Counselor”), who promoted a communal existence, free of taxes and oppression. To the fledgling republic of Brazil, the settlement represented a threat to their system of government, which had only recently been freed from monarchy. Estimates of the death toll at Canudos range from fifteen thousand to thirty thousand. Sentencing Canudos offers an original perspective on the hegemonic intellectual discourse surrounding this monumental event in Brazilian history. In her study, Adriana Michele Campos Johnson offers a close examination of nation building and the silencing of “other” voices through the reinvisioning of history. Looking primarily to Euclides da CunhaÆs Os Sertu00f5es, which has become the defining&mdash;and nearly exclusive&mdash;account of the conflict, she maintains that the events and people of Canudos have been “sentenced” to history by this work. Johnson investigates other accounts of Canudos such as local oral histories, letters, newspaper articles, and the writings of CunhaÆs contemporaries, Afonso Arinos and Manoel Benício, in order to strip away political agendas. She also seeks to place the inhabitants and events of Canudos within the realm of “everydayness” by recalling aspects of daily life that have been left out of official histories.Johnson analyzes the role of intellectuals in the process of culture and state formation and the ensuing sublimation of subaltern histories and populations. She echoes recent scholarship that posits subalternity as the product of discourse that must be disputed in order to recover cultural identities and offers a view of Canudos and postcolonial Latin America as a place to think from, not about.