Adrianne R. Andrews is assistant professor of Africana Studies at the University of Pittsburgh and author of several articles on Africana women’s studies. 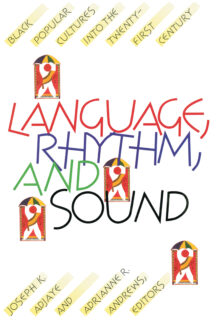 Focusing on expressions of popular culture among blacks in Africa, the United States, and the Carribean this collection of multidisciplinary essays takes on subjects long overdue for study. Fifteen essays cover a world of topics, from American girls’ Double Dutch games to protest discourse in Ghana; from Terry McMillan’s Waiting to Exhale to the work of Zora Neale Hurston; from South African workers to Just Another Girl on the IRT; from the history of Rasta to the evolving significance of kente clothl from rap video music to hip-hop to zouk.
The contributors work through the prisms of many disciplines, including anthropology, communications, English, ethnomusicology, history, linguistics, literature, philosophy, political economy, psychology, and social work. Their interpretive approaches place the many voices of popular black cultures into a global context. It affirms that black culture everywhere functions to give meaning to people’s lives by constructing identities that resist cultural, capitolist, colonial, and postcolonial domination.