Alberto A. Martínez is associate professor of history at the University of Texas at Austin. He is the author of Science Secrets: The Truth about Darwin’s Finches, Einstein’s Wife, and Other Myths; Kinematics: The Lost Origins of Einstein’s Relativity; and Negative Math: How Mathematical Rules Can Be Positively Bent. 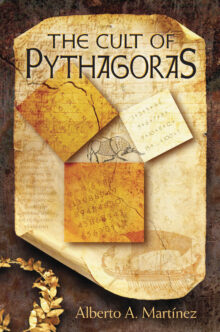 The Cult of Pythagoras

By Alberto A. Martinez

In this follow-up to his popular Science Secrets, Alberto A. Martínez discusses various popular myths from the history of mathematics: that Pythagoras proved the hypotenuse theorem, that Archimedes figured out how to test the purity of a gold crown while he was in a bathtub, that the Golden Ratio is in nature and ancient architecture, that the young Galois created group theory the night before the pistol duel that killed him, and more. Some stories are partly true, others are entirely false, but all show the power of invention in history. Pythagoras emerges as a symbol of the urge to conjecture and “fill in the gaps” of history. He has been credited with fundamental discoveries in mathematics and the sciences, yet there is nearly no evidence that he really contributed anything to such fields at all. This book asks: how does history change when we subtract the many small exaggerations and interpolations that writers have added for over two thousand years?

The Cult of Pythagoras is also about invention in a positive sense. Most people view mathematical breakthroughs as “discoveries” rather than invention or creativity, believing that mathematics describes a realm of eternal ideas. But mathematicians have disagreed about what is possible and impossible, about what counts as a proof, and even about the results of certain operations. Was there ever invention in the history of concepts such as zero, negative numbers, imaginary numbers, quaternions, infinity, and infinitesimals?

Martínez inspects a wealth of primary sources, in several languages, over a span of many centuries. By exploring disagreements and ambiguities in the history of the elements of mathematics, The Cult of Pythagoras dispels myths that obscure the actual origins of mathematical concepts. Martínez argues that an accurate history that analyzes myths reveals neglected aspects of mathematics that can encourage creativity in students and mathematicians. 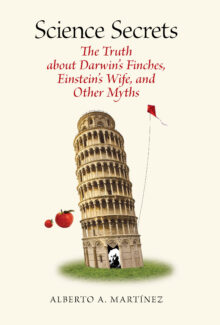 The Truth about Darwin's Finches, Einstein's Wife, and Other Myths

By Alberto A. Martinez

Was Darwin really inspired by Galapagos finches? Did Einstein’s wife secretly contribute to his theories? Did Franklin fly a kite in a thunderstorm? Did a falling apple lead Newton to universal gravity? Did Galileo drop objects from the Leaning Tower of Pisa? Did Einstein really believe in God?

Science Secrets answers these questions and many others. It is a unique study of how myths evolve in the history of science. Some tales are partly true, others are mostly false, yet all illuminate the tension between the need to fairly describe the past and the natural desire to fill in the blanks.

Energetically narrated, Science Secrets pits famous myths against extensive research from primary sources in order to accurately portray important episodes in the sciences. Alberto A. Martinez analyzes how such myths grow and rescues neglected facts that are more captivating than famous fictions. Moreover, he shows why opinions that were once secret and seemingly impossible are now scientifically compelling. The book includes new findings related to the Copernican revolution, alchemy, Pythagoras, young Einstein, and other events and figures in the history of science.