Aldo Lauria, associate professor of history and director of Latin American and Latino Studies at the College of the Holy Cross, is the author of An Agrarian Republic: Commercial Agriculture and the Politics of Peasant Communities in El Salvador, 1823-1914.

By Aldo A. Lauria

During the 1980s, El Salvador’s violent civil war captured the world’s attention. In the years since, the country has undergone dramatic changes. Landscapes of Struggle offers a broad, interdisciplinary assessment of El Salvador from the late nineteenth century to the present, focusing on the ways local politics have shaped the development of the nation.
Proceeding chronologically, these essays-by historians, political scientists, sociologists, and anthropologists-explore the political, social, and cultural dynamics governing the Salvadoran experience, including the crucial roles of land, the military, and ethnicity; the effects of the civil war; and recent transformations, such as the growth of a large Salvadoran diaspora in the United States. Taken together, they provide a fully realized portrait of El Salvador’s troublesome past, transformative present, and uncertain future. 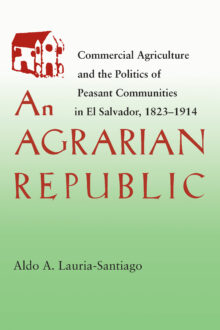 Commercial Agriculture and the Politics of Peasant Communities in El Salvador, 1823–1914

By Aldo A. Lauria

With unprecedented use of local and national sources, Lauria-Santiago presents a more complex portrait of El Salvador than has ever been ventured before. Using thoroughly researched regional case studies, Lauria-Santiago uncovers an astonishing variety of patterns in land use, labor, and the organization of production. He finds a diverse, commercially active peasantry that was deeply involved with local and national networks of power. An Agrarian Republic challenges the accepted vision of Central America in the nineteenth century and critiques the “liberal oligarchic hegemony” model of El Salvador. Detailed discussions of Ladino victories and successful Indian resistance give a perspective on Ladinization that does not rely on a polarized understanding of ethnic identity.