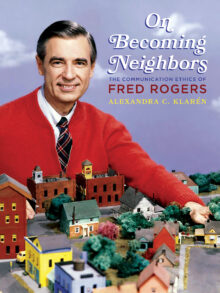 The Communication Ethics of Fred Rogers

Fred Rogers is an American cultural and media icon, whose children’s television program, Mister Rogers’ Neighborhood, ran for more than thirty years (1967-2001) on the Public Broadcasting System (PBS). In this highly original book, Alexandra C. Klarén shows how Rogers captured the moral, social, and emotional imaginations of multiple generations of Americans. She explores the nuanced complexity of the thought behind the man and the program, the dialogical integration of his various influences, and the intentional ethic of care behind the creation of a program that spoke to the affective, socio-cultural, and educational needs of children (and adults) during a period of cultural upheaval. Richly informed by newly available archival materials, On Becoming Neighbors chronicles the evolution of Rogers’ thought on television, children, pedagogy, and the family through a rhetorical, cultural, and ethical lens. Klarén probes how Rogers creates the conditions for dialogue in which participants explore possibilities and questions relating to the social and material world.