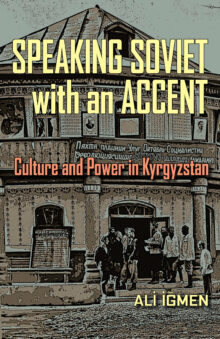 Speaking Soviet with an Accent

Culture and Power in Kyrgyzstan

Speaking Soviet with an Accent presents the first English-language study of Soviet culture clubs in Kyrgyzstan. These clubs profoundly influenced the future of Kyrgyz cultural identity and fostered the work of many artists, such as famed novelist Chingiz Aitmatov.

Based on extensive oral history and archival research, Ali Igmen follows the rise of culture clubs beginning in the 1920s, when they were established to inculcate Soviet ideology and create a sedentary lifestyle among the historically nomadic Kyrgyz people. These “Red clubs” are fondly remembered by locals as one of the few places where lively activities and socialization with other members of their ail (village or tribal unit) could be found.

Through lectures, readings, books, plays, concerts, operas, visual arts, and cultural Olympiads, locals were exposed to Soviet notions of modernization. But these programs also encouraged the creation of a newfound “Kyrgyzness” that preserved aspects of local traditions and celebrated the achievements of Kyrgyz citizens in the building of a new state. These ideals proved appealing to many Kyrgyz, who, for centuries, had seen riches and power in the hands of a few tribal chieftains and Russian imperialists.

This book offers new insights into the formation of modern cultural identity in Central Asia. Here, like their imperial predecessors, the Soviets sought to extend their physical borders and political influence. But Igmen also reveals the remarkable agency of the Kyrgyz people, who employed available resources to meld their own heritage with Soviet and Russian ideologies and form artistic expressions that continue to influence Kyrgyzstan today.