Anibal Gonzalez is professor of modern Latin American literature in the department of Spanish and Portuguese at Yale University. He is the author of numerous books and several translations. His recent publications include Love and Politics in the Contemporary Spanish American Novel and a critical edition of Redentores by Manuel Zeno Gandia. Gonzalez is the founder and general editor of the Bucknell Studies in Latin American Literature and Theory Series at Bucknell University Press, and former general editor of the Cambridge Studies in Latin American and Iberian Literature Series of Cambridge University Press. 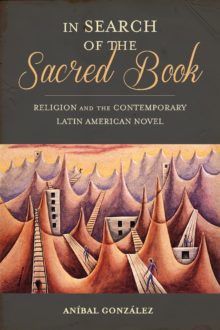 In Search of the Sacred Book

In Search of the Sacred Book studies the artistic incorporation of religious concepts such as prophecy, eternity, and the afterlife in the contemporary Latin American novel. It departs from sociopolitical readings by noting the continued relevance of religion in Latin American life and culture, despite modernity’s powerful secularizing influence. Analyzing Jorge Luis Borges’s secularized “narrative theology” in his essays and short stories, the book follows the development of the Latin American novel from the early twentieth century until today by examining the attempts of major novelists, from María Luisa Bombal, Alejo Carpentier, and Juan Rulfo, to Julio Cortázar, Gabriel García Márquez, and José Lezama Lima, to “sacralize” the novel by incorporating traits present in the sacred texts of many religions. It concludes with a view of the “desacralization” of the novel by more recent authors, from Elena Poniatowska and Fernando Vallejo to Roberto Bolaño.