Antonello Gerbi (1904-1976) was a specialist on the history of political ideology and the author of several books, including The Dispute of the New World: The History of a Polemic, 1750-1900. 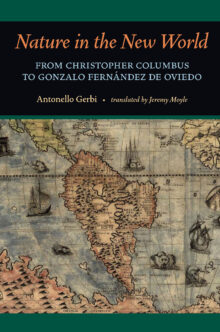 Nature in the New World

In Nature in the New World (translated 1985), Antonello Gerbi examines the fascinating reports of the first Europeans to see the Americas. These accounts provided the basis for the images of strange and new flora, fauna, and human creatures that filled European imaginations.

Initial chapters are devoted to the writings of Columbus, Vespucci, Cortés, Verrazzano, and others. The second portion of the book concerns the Historia general y natural de las Indias of Gonzalo Fernández de Oviedo, a work commissioned by Charles V of Spain in 1532 but not published in its entirety until the 1850s. Antonello Gerbi contends that Oviedo, a Spanish administrator who lived in Santo Domingo, has been unjustly neglected as a historian. Gerbi shows that Oviedo was a major authority on the culture, history, and conquest of the New World. 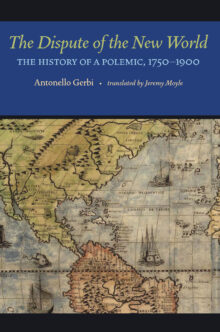 The Dispute of the New World

When Hegel described the Americas as an inferior continent, he was repeating a contention that inspired one of the most passionate debates of modern times. Originally formulated by the eminent natural scientist Georges-Louis Leclerc, Comte de Buffon and expanded by the Prussian encyclopedist Cornelius de Pauw, this provocative thesis drew heated responses from politicians, philosophers, publicists, and patriots on both sides of the Atlantic. The ensuing polemic reached its apex in the latter decades of the eighteenth century and is far from extinct today.

Translated in 1973, The Dispute of the New World is the definitive study of this debate. Antonello Gerbi scrutinizes each contribution to the debate, unravels the complex arguments, and reveals their inner motivations. As the story of the polemic unfolds, moving through many disciplines that include biology, economics, anthropology, theology, geophysics, and poetry, it becomes clear that the subject at issue is nothing less than the totality of the Old World versus the New, and how each viewed the other at a vital turning point in history.