Anya Bernstein is lecturer on social studies at Harvard University and has published several scholarly articles in Policy Studies and The Harvard Writing Bulletin. 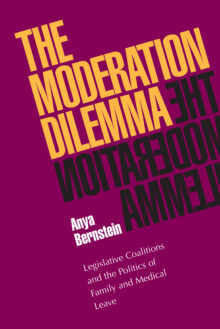 Legislative Coalitions and the Politics of Family and Medical Leave

The effort to legislate family and medical leave policies in the United States illustrates a dilemma at the heart of the American political process. Faced with strong opposition from business lobbies, proponents of leaves in the late 1980s and early 1990s had to balance their desire to pass the policy they wanted against the desire to pass a policy at all.

In this lucid and timely book, Anya Bernstein analyzes how this “moderation dilemma” played out at the federal level and in four states. In so doing, she develops a new model of policy innovation based on the debate between the ideologically committed who want all or nothing (and often get nothing) and compromisers who will settle for less (and often get a lot less). Hers is a unique perspective on one of the few major policy innovations of the 1990s, and on the contentious issue of the role of the state in American family life.

Based on interviews with activists, legislators, staff members, and observers, The Moderation Dilemma uncovers the process by which advocates for family and medical leave determined what they would propose, chose their strategies, lobbied, and bargained. Bernstein found that groups were successful when they had access to

substantial resources, were willing to frame their proposals in culturally appropriate ways, and “fit” their strategies to the political context. In the case of family and medical leave, this meant co-opting the tactics of the new right and framing family leave as family values, as well as making significant compromises. But not all groups were willing to make these compromises. The fact that the laws mandating family and medical leaves cover barely half the population, and are unpaid, raises questions about the costs and benefits of moderation.

Bernstein also takes a fresh look at women’s movement groups in the 1990s. She compares those who have learned to work within the political system (insiders) with those that still focus on challenging it (outsiders). The women’s groups that led the fight to pass family and medical leave had to rethink their goals as supporters both of equality for women and of accommodation for women’s role as mothers. The Moderation Dilemma examines that transition and its debates, as well as the implications for the women’s movement as a whole.

Students and professionals in political science, sociology, and organizational theory will want to read The Moderation Dilemma, as will anyone concerned with the behavior of interest groups and social movements.