Aristides Baltas teaches at the National Technical University of Athens (NTUA), Greece. He is coeditor of Scientific Controversies: Philosophical and Historical Perspectives. 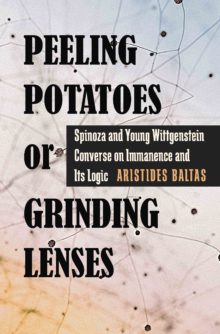 Spinoza and Young Wittgenstein Converse on Immanence and Its Logic

“I can work best now while peeling potatoes. . . . It is for me what lens-grinding was for Spinoza.”—L. Wittgenstein

More than 250 years separate the publication of Baruch Spinoza’s Ethics and Ludwig Wittgenstein’s Tractatus Logico-Philosophicus. Both are considered monumental philosophical treatises, produced during markedly different times in human history, and notoriously challenging to interpret. In Peeling Potatoes or Grinding Lenses, Aristides Baltas contends that these works bear a striking similarity based on the idea of “radical immanence.” Each purports to understand the world, thought, and language from the inside and in a way leading to the dissolution of all philosophy. In that guise, both offer a powerful argument against fundamentalism of all sorts and kinds

To Spinoza, God is just Nature. God is not above or separate from the world, humanity, or mere objects for, as Nature, He inheres in everything. To Wittgenstein, logic is not above or separate from language, thought, and the world. The hardness of the logical “must” inheres in states of affairs, facts, thoughts, and linguistic acts. Outside there are no truths or sense—only nonsense.

Through close readings of the texts based on lessons drawn from radical paradigm change in science, Baltas finds in both works a single-minded purpose, implacable reasoning, and an austerity of style that are rare in the history of philosophy. He analyzes the structure and content of each treatise, the authors’ intentions, the limitations and possibilities afforded by scientific discovery in their respective eras, their radical opposition to prevailing philosophical views, and draws out the particulars, as well as the implications, of the arresting match between the two.