Asif A. Siddiqi is associate professor of history of technology and Russian history at Fordham University. He is the author or editor of three books, including The Red Rockets’ Glare: Spaceflight and the Soviet Imagination, 1857-1957 and Challenge to Apollo: The Soviet Union and the Space Race, 1945-1974. 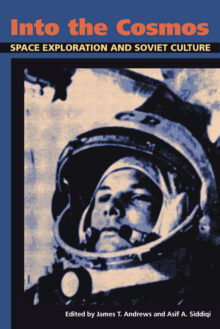 The launch of the Sputnik satellite in October 1957 changed the course of human history. In the span of a few years, Soviets sent the first animal into space, the first man, and the first woman. These events were a direct challenge to the United States and the capitalist model that claimed ownership of scientific aspiration and achievement.

The success of the space program captured the hopes and dreams of nearly every Soviet citizen and became a critical cultural vehicle in the countryÆs emergence from Stalinism and the devastation of World War II. It also proved to be an invaluable tool in a worldwide propaganda campaign for socialism, a political system that could now seemingly accomplish anything it set its mind to.

Into the Cosmos shows us the fascinating interplay of Soviet politics, science, and culture during the Khrushchev era, and how the space program became a binding force between these elements. The chapters examine the ill-fitted use of cosmonauts as propaganda props, the manipulation of gender politics after Valentina TereshkovaÆs flight, and the use of public interest in cosmology as a tool for promoting atheism. Other chapters explore the dichotomy of promoting the space program while maintaining extreme secrecy over its operations, space animals as media darlings, the history of Russian space culture, and the popularity of space-themed memorabilia that celebrated Soviet achievement and planted the seeds of consumerism.