Aviezer Tucker is editor of the East European Constitutional Review at New York University. During the 1998-1999 academic year, Tucker was a Mellon postdoctoral research fellow at the Department of Political Science at Columbia University. Previously he taught in the department of Politics and European Studies at Palacky University in the Czech Republic and conducted research under the auspices of the Research Support Scheme of the Prague Central Euroepan University (1992-1994). Tucker has a Ph.D. in philosophy from the University of Maryland, College Park (1992), and a B.A. in history (1988) from the University of Tel Aviv. He has published numerous articles on philosophy and politics in journals such as Elos, History and Theory, and The Journal of Applied Philosophy. 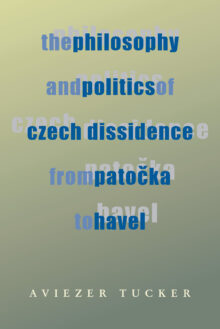 The Philosophy and Politics of Czech Dissidence from Patocka to Havel

A critical study of the philosophy and political practice of the Czech dissident movement Charter 77. Aviezer Tucker examines how the political philosophy of Jan Patocka (1907-1977), founder of Charter 77, influenced the thinking and political leadership of Vaclav Havel as dissident and president.
Presents the first serious treatment of Havel as philosopher and Patocka as a political thinker. Through the Charter 77 dissident movement in Czechoslovakia, opponents of communism based their civil struggle for human rights on philosophic foundations, and members of the Charter 77 later led the Velvet Revolution. After Patocka’s self-sacrifice in 1977, Vaclav Havel emerged a strong philosophical and political force, and he continued to apply Patocka’s philosophy in order to understand the human condition under late communism and the meaning of dissidence. However, the political/philosophical orientation of the Charter 77 movement failed to provide President Havel with an adequate basis for comprehending and responding to the extraordinary political and economic problems of the postcommunist period.
In his discussion of Havel’s presidency and the eventual corruption of the Velvet Revolution, Tucker demonstrates that the weaknesses in Charter 77 member’s understanding of modernity, which did not matter while they were dissidents, seriously harmed their ability to function in a modern democratic system. Within this context, Tucker also examines Havel’s recent attempt to topple the democratic but corrupt government in 1997-1998. The Philosophy and Politics of Czech Dissidence from Patocka to Havel will be of interest to students of philosophy and politics, scholars and students of Slavic studies, and historians, as well as anyone fascinated by the nature of dissidence.