Barbara Monroe, former associate professor of English and coordinator of English Education at Washington State University, is also the author of Crossing the Digital Divide: Race, Writing, and Technology in the Classroom. 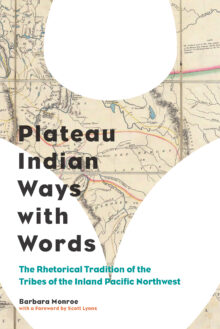 The Rhetorical Tradition of the Tribes of the Inland Pacific Northwest

In Plateau Indian Ways with Words, Barbara Monroe makes visible the arts of persuasion of the Plateau Indians, whose ancestral grounds stretch from the Cascades to the Rockies, revealing a chain of cultural identification that predates the colonial period and continues to this day. Culling from hundreds of student writings from grades 7-12 in two reservation schools, Monroe finds that students employ the same persuasive techniques as their forebears, as evidenced in dozens of post-conquest speech transcriptions and historical writings. These persuasive strategies have survived not just across generations, but also across languages from Indian to English and across multiple genres from telegrams and Supreme Court briefs to school essays and hip hop lyrics.

Anecdotal evidence, often dramatically recreated; sarcasm and humor; suspended or unstated thesis; suspenseful arrangement; intimacy with and respect for one’s audience as co-authors of meaning—these are among the privileged markers in this particular indigenous rhetorical tradition. Such strategies of personalization, as Monroe terms them, run exactly counter to Euro-American academic standards that value secondary, distant sources; “objective” evidence; explicit theses; “logical” arrangement. Not surprisingly, scores for Native students on mandated tests are among the lowest in the nation.

While Monroe questions the construction of this so-called achievement gap on multiple levels, she argues that educators serving Native students need to seek out points of cultural congruence, selecting assignments and assessments where culturally marked norms converge, rather than collide. New media have opened up many possibilities for this kind of communicative inclusivity. But seizing such opportunities is predicated on educators, first, recognizing Plateau Indian students’ distinctive rhetoric, and then honoring their sovereign right to use it. This book provides that first step.