Benjamin Lazier is associate professor of history and humanities at Reed College and the author of God Interrupted: Heresy and the European Imagination Between the World Wars. 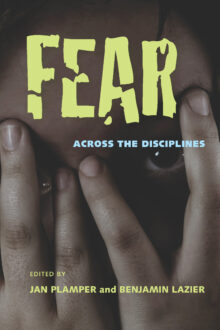 This volume provides a cross-disciplinary examination of fear, that most unruly of our emotions, by offering a broad survey of the psychological, biological, and philosophical basis of fear in historical and contemporary contexts. The contributors, leading figures in clinical psychology, neuroscience, the social sciences, and the humanities, consider categories of intentionality, temporality, admixture, spectacle, and politics in evaluating conceptions of fear.

Individual chapters treat manifestations of fear in the mass panic of the stock market crash of 1929, as spectacle in warfare and in horror films, and as a political tool to justify security measures in the wake of terrorist acts. They also describe the biological and evolutionary roots of fear, fear as innate versus learned behavior in both humans and animals, and conceptions of human “passions” and their self-mastery from late antiquity to the early modern era. Additionally, the contributors examine theories of intentional and non-intentional reactivity, the process of fear-memory coding, and contemporary psychology’s emphasis on anxiety disorders.

Overall, the authors point to fear as a dense and variable web of responses to external and internal stimuli. Our thinking about these reactions is just as complex. In response, this volume opens a dialogue between science and the humanities to afford a more complete view of an emotion that has shaped human behavior since time immemorial.