Bernadette A. Lear is the behavioral sciences and education librarian at Pennsylvania State University’s Harrisburg campus. With Eric C. Novotny, she is the founding coeditor of the scholarly journal Libraries: Culture, History, and Society. Lear’s research focuses on the history of libraries, which she studies as an intersection of cultural, labor, social, and women’s history. 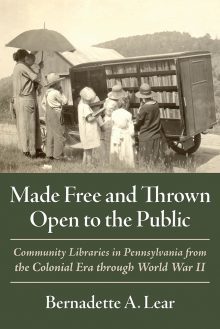 Made Free and Thrown Open to the Public

By Bernadette A. Lear

Made Free and Thrown Open to the Public charts the history of public libraries and librarianship in Pennsylvania. Based on archival research at more than fifty libraries and historical societies, it describes a long progression from private, subscription-based associations to publicly funded institutions, highlighting the dramatic period during the late nineteenth and early twentieth centuries when libraries were “thrown open” to women, children, and the poor. Made Free explains how Pennsylvania’s physical and cultural geography, legal codes, and other unique features influenced the spread and development of libraries across the state. It also highlights Pennsylvania libraries’ many contributions to the social fabric, especially during World War I, the Great Depression, and World War II. Most importantly of all, Made Free convincingly argues that Pennsylvania libraries have made their greatest strides when community activists and librarians, supported with state and local resources, have worked collaboratively.