Boris B. Gorshkov is visiting assistant professor of Russian, European, and world history at Auburn University. He is the author of A Life Under Serfdom: Memoirs of Savva Dmitrievich Purlevskii, 1800-68, and has contributed articles to numerous books and journals, including Encyclopedia of Europe, 1794-1914 and Encyclopedia of European Social History, from 1300 to 2000. 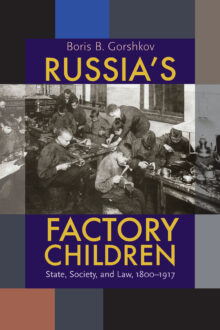 By Boris B. Gorshkov

At the height of the Russian industrial revolution, legions of children toiled in factories, accounting for fifteen percent of the workforce. Yet, by the end of the nineteenth century, their numbers had been greatly reduced, thanks to legislation that sought to protect the welfare of children for the first time.

Russia's Factory Children presents the first English-language account of the changing role of children in the Russian workforce, from the onset of industrialization until the Communist Revolution of 1917, and profiles the laws that would establish children's labor rights.

Through extensive archival research, Gorshkov views the evolution of Russian child labor law as a reaction to the rise of industrialism and the increasing dangers of the workplace. Perhaps most remarkable is his revelation that activism, from the bourgeoisie, intellectuals, and children themselves, led to the conciliation of legislators and marked a progressive shift that would impact Russian society in the early twentieth century and beyond.