Botakoz Kassymbekova is a scholar at the Forum Transregionale Studien Berlin. 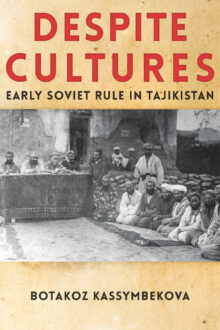 Despite Cultures examines the strategies and realities of the Soviet state-building project in Tajikistan during the 1920s and 1930s. Based on extensive archival research, Botakoz Kassymbekova analyzes the tactics of Soviet officials at the center and periphery that produced, imitated, and improvised governance in this Soviet southern borderland and in Central Asia more generally. She shows how the tools of violence, intimidation, and coercion were employed by Muslim and European Soviet officials alike to implement Soviet versions of modernization and industrialization. In a region marked by ethnic, linguistic, and cultural diversity, the Soviet plan was to recognize these differences while subsuming them within the conglomerate of official Soviet culture. As Kassymbekova reveals, the local ruling system was built upon an intricate network of individuals, whose stated loyalty to communism was monitored through a chain of command that stretched from Moscow through Tashkent to Dushanbe/Stalinabad. The system was tenuously based on individual leaders who struggled to decipher the language of Bolshevism and maintain power through violent repression.