Brad Felver is a fiction writer, essayist, and teacher of writing. His fiction has appeared widely in magazines such as One Story, Colorado Review, and Midwestern Gothic. His essays have appeared in New England Review, Hunger Mountain, BULL: Men’s Fiction, and Fiction Writer’s Review among other places. His awards include a Pushcart Prize Special Mention , the Zone 3 Fiction Prize, and most recently the 2018 Drue Heinz Literature Prize. The Dogs of Detroit is his first story collection. He lives with his wife and kids in northern Ohio. 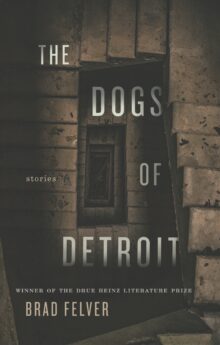 The Dogs of Detroit

The 14 stories of The Dogs of Detroit each focus on grief and its many strange permutations. This grief alternately devolves into violence, silence, solitude, and utter isolation. In some cases, grief drives the stories as a strong, reactionary force, and yet in other stories, that grief evolves quietly over long stretches of time. Many of the stories also use grief as a prism to explore the beguiling bonds within families. The stories span a variety of geographies, both urban and rural, often considering collisions between the two.