Brian G. Henning is professor of philosophy and environmental studies at Gonzaga University. He was awarded the John N. Findlay Book Prize from the Metaphysical Society of America for The Ethics of Creativity. Henning is coauthor or coeditor of several books, including Genesis, Evolution, and the Search for a Reasoned Faith; Thinking with Whitehead and American Pragmatism; Being in America: Sixty Years of the Metaphysical Society; Beyond Mechanism: Putting Life Back Into Biology; and Beyond Metaphysics? Explorations in Alfred North Whitehead’s Late Thought. 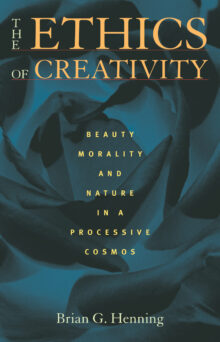 The Ethics of Creativity

Beauty, Morality, and Nature in a Processive Cosmos

Foreword by Daniel A. Dombrowski. A central concern of nearly every environmental ethic is its desire to extend the scope of direct moral concern beyond human beings to plants, nonhuman animals, and the systems of which they are a part. Although nearly all environmental philosophies have long since rejected modernity’s conception of individuals as isolated and independent substances, few have replaced this worldview with an alternative that is adequate to the organic, processive world in which we find ourselves. In this context, Brian G. Henning argues that the often overlooked work of Alfred North Whitehead has the potential to make a significant contribution to environmental ethics. Additionally inspired by classical American philosophers such as William James, John Dewey and Charles Sanders Pierce and environmental philosophers such as Aldo Leopold, Peter Singer, Albert Schweitzer, and Arne Naess, Henning develops an ethical theory of which the seminal insight is called “The Ethics of Creativity.”By systematically examining and developing a conception of individuality that is equally at home with the microscopic world of subatomic events and the macroscopic world of ecosystems, The Ethics of Creativity correctly emphasizes the well-being of wholes, while not losing sight of the importance of the unique centers of value that constitute these wholes. In this way, The Ethics of Creativity has the potential to be a unique voice in contemporary moral philosophy.