Bryan Trabold is associate professor of English at Suffolk University in Boston, Massachusetts, and a research associate with the Visual Identities in Art and Design Centre at the University of Johannesburg, South Africa. 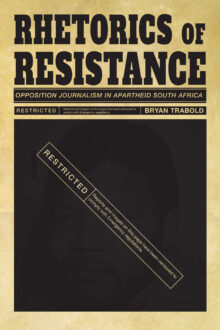 The period of apartheid was a perilous time in South Africa’s history. This book examines the tactics of resistance developed by those working for the Weekly Mail and New Nation, two opposition newspapers published in South Africa in the mid- and late 1980s. The government, in an attempt to crack down on the massive political resistance sweeping the country, had imposed martial law and imposed even greater restrictions on the press. Bryan Trabold examines the writing, legal, and political strategies developed by those working for these newspapers to challenge the censorship restrictions as much as possible—without getting banned. Despite the many steps taken by the government to silence them, including detaining the editor of New Nation for two years and temporarily closing both newspapers, the Weekly Mail and New Nation not only continued to publish but actually increased their circulations and obtained strong domestic and international support. New Nation ceased publication in 1994 after South Africa made the transition to democracy, but the Weekly Mail, now the Mail & Guardian, continues to publish and remains one of South Africa’s most respected newspapers.