Candace Epps-Robertson is an assistant professor of English at the University of North Carolina. Her research examines the social histories of literacy and cultural rhetoric, in particular how these practices develop and respond to oppression. 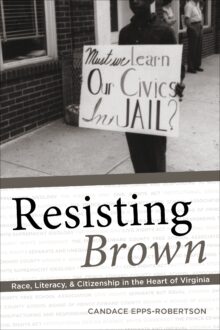 Race, Literacy, and Citizenship in the Heart of Virginia

Many localities in America resisted integration in the aftermath of the Brown v. Board of Education rulings (1954, 1955). Virginia’s Prince Edward County stands as perhaps the most extreme. Rather than fund integrated schools, the county’s board of supervisors closed public schools from 1959 until 1964. The only formal education available for those locked out of school came in 1963 when the combined efforts of Prince Edward’s African American community and aides from President John F. Kennedy’s administration established the Prince Edward County Free School Association (Free School). This temporary school system would serve just over 1,500 students, both black and white, aged 6 through 23.

Drawing upon extensive archival research, Resisting Brown presents the Free School as a site in which important rhetorical work took place. Candace Epps-Robertson analyzes public discourse that supported the school closures as an effort and manifestation of citizenship and demonstrates how the establishment of the Free School can be seen as a rhetorical response to white supremacist ideologies. The school’s mission statements, philosophies, and commitment to literacy served as arguments against racialized constructions of citizenship. Prince Edward County stands as a microcosm of America’s struggle with race, literacy, and citizenship.