Carmelo Esterrich is associate professor of Spanish, humanities, and cultural studies at Columbia College Chicago. He has published widely on cultural and artistic production in Latin America. 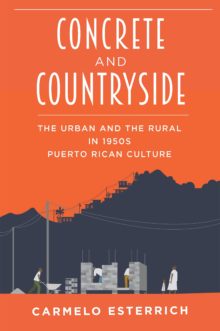 The Urban and the Rural in 1950s Puerto Rican Culture

From the late 1940s to the early 1960s, Puerto Rico was swept by a wave of modernization, transforming the island from a predominantly rural society to an unquestionably urban one. A curious paradox ensued, however. While the island underwent rapid urbanization, and the rhetoric of economic development reigned over official discourses, the newly installed insular government, along with some academic circles and radio and television media, constructed, promoted, and sponsored a narrative of Puerto Rican culture based on rural subjects, practices, and spaces.
By examining a wide range of cultural texts, but focusing on the film production of the Division of Community Education, the popular dance music of Cortijo y su combo, and the literary texts of Jose Luis Gonzalez and Rene Marques, Concrete and Countryside offers an in-depth analysis of how Puerto Ricans responded to this transformative period. It also shows how the arts used a battery of images of the urban and the rural to understand, negotiate, and critique the innumerable changes taking place on the island.