Carmen Soliz is assistant professor of Latin American history at the University of North Carolina at Charlotte and a Bolivian historian. 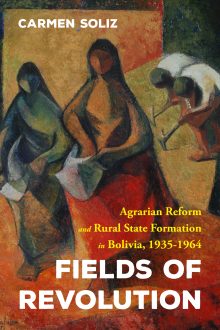 Fields of Revolution examines the second largest case of peasant land redistribution in Latin America and agrarian reform—arguably the most important policy to arise out of Bolivia’s 1952 revolution. Competing understandings of agrarian reform shaped ideas of property, productivity, welfare, and justice. Peasants embraced the nationalist slogan of “land for those who work it” and rehabilitated national union structures. Indigenous communities proclaimed instead “land to its original owners” and sought to link the ruling party discourse on nationalism with their own long-standing demands for restitution. Landowners, for their part, embraced the principle of “land for those who improve it” to protect at least portions of their former properties from expropriation. Carmen Soliz combines analysis of governmental policies and national discourse with everyday local actors’ struggles and interactions with the state to draw out the deep connections between land and people as a material reality and as the object of political contention in the period surrounding the revolution.