Casey P. Cater is an enrgy historian in Atlanta, Georgia. 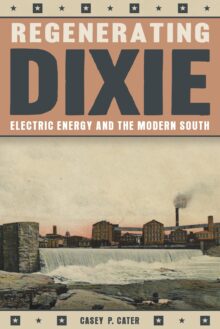 Electric Energy and the Modern South

Regenerating Dixie is the first book that traces the electrification of the US South from the 1880s to the 1970s. It emphasizes that electricity was not solely the result of technological innovation or federal intervention. Instead, it was a multifaceted process that influenced, and was influenced by, environmental alterations, political machinations, business practices, and social matters. Although it generally hewed to national and global patterns, southern electrification charted a distinctive and instructive path and, despite orthodoxies to the contrary, stood at the cutting edge of electrification from the late 1800s onward. Its story speaks to the ways southern experiences with electrification reflected and influenced larger American models of energy development.
Inasmuch as the South has something to teach us about the history of American electrification, electrification also reveals things about the South’s past. The electric industry was no mere accessory to the “New South” agenda—the ongoing project of rehabilitating Dixie after the Civil War and Reconstruction. Electricity powered industrialism, consumerism, urban growth, and war. It moved people across town, changed land- and waterscapes, stoked racial conflict, sparked political fights, and lit homes and farms. Electricity underwrote people’s daily lives across a century of southern history.
But it was not simply imposed on the South. In fact, one Regenerating Dixie’s central lessons is that people have always mattered in energy history. The story of southern electrification is part of the broader struggle for democracy in the American past and includes a range of expected and unexpected actors and events. It also offers insights into our current predicaments with matters of energy and sustainability.