Catalina Smulovitz is director of the Department of Political Science and International Studies at Torcuato Di Tella University in Buenos Aires. She is the author of Oposición y Gobierno. Los Años de Frondizi. Her articles have appeared in La Nueva Matriz Política Argentina, Journal of Democracy, Desarrollo Económico, and Agora. 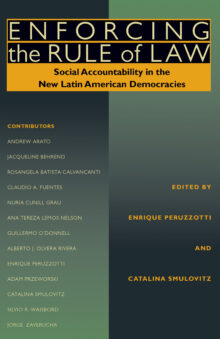 Enforcing the Rule of Law

Reports of scandal and corruption have led to the downfall of numerous political leaders in Latin America in recent years. What conditions have developed that allow for the exposure of wrongdoing and the accountability of leaders? Enforcing the Rule of Law examines how elected officials in Latin American democracies have come under scrutiny from new forms of political control, and how these social accountability mechanisms have been successful in counteracting corruption and the limitations of established institutions.
This volume reveals how legal claims, media interventions, civic organizations, citizen committees, electoral observation panels, and other watchdog groups have become effective tools for monitoring political authorities. Their actions have been instrumental in exposing government crime, bringing new issues to the public agenda, and influencing or even reversing policy decisions.
Enforcing the Rule of Law presents compelling accounts of the emergence of civic action movements and their increasing political influence in Latin America, and sheds new light on the state of democracy in the region.