Catherine Evtuhov is associate professor of history at Georgetown University. She is the author, coauthor, or editor of a number of books, including A History of Russia: Peoples, Legends, Events, Forces and The Cross and the Sickle: Sergei Bulgakov and the Fate of Russian Religious Philosophy, 1890-1920. 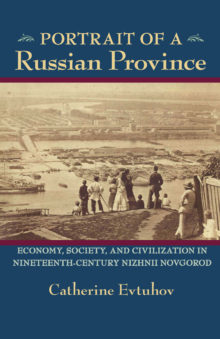 Portrait of a Russian Province

Several stark premises have long prevailed in our approach to Russian history. It was commonly assumed that Russia had always labored under a highly centralized and autocratic imperial state. The responsibility for this lamentable state of affairs was ultimately assigned to the profoundly agrarian character of Russian society. The countryside, home to the overwhelming majority of the nationÆs population, was considered a harsh world of cruel landowners and ignorant peasants, and a strong hand was required for such a crude society.

A number of significant conclusions flowed from this understanding. Deep and abiding social divisions obstructed the evolution of modernity, as experienced “naturally” in other parts of Europe, so there was no Renaissance or Reformation; merely a derivative Enlightenment; and only a distorted capitalism. And since only despotism could contain these volatile social forces, it followed that the 1917 Revolution was an inevitable explosion resulting from these intolerable contradictions&mdash;and so too were the blood-soaked realities of the Soviet regime that came after. In short, the sheer immensity of its provincial backwardness could explain almost everything negative about the course of Russian history.

This book undermines these preconceptions. Through her close study of the province of Nizhnii Novgorod in the nineteenth century, Catherine Evtuhov demonstrates how nearly everything we thought we knew about the dynamics of Russian

society was wrong. Instead of peasants ground down by poverty and ignorance, we find skilled farmers, talented artisans and craftsmen, and enterprising tradespeople. Instead of an exclusively centrally administered state, we discover effective and participatory local government. Instead of pervasive ignorance, we are shown a lively cultural scene and an active middle class. Instead of a defining Russian exceptionalism, we find a world recognizable to any historian of nineteenth-century Europe.

Drawing on a wide range of Russian social, environmental, economic, cultural, and intellectual history, and synthesizing it with deep archival research of the Nizhnii Novgorod province, Evtuhov overturns a simplistic view of the Russian past. Rooted in, but going well beyond, provincial affairs, her book challenges us with an entirely new perspective on RussiaÆs historical trajectory.